“I wanted to kill myself, I couldn’t see a way out.” 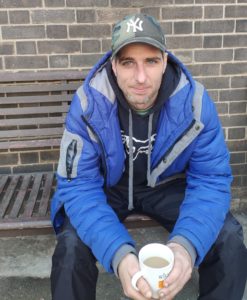 Matt came to Shiloh looking for help after sleeping rough for months. He struggled with addictions and had high rent arrears, which really affected his mental health. He couldn’t see a way out of his situation until he came to Shiloh.

What was your situation when you first visited Shiloh?

“My girlfriend and I had drug problems and we fell into rent arrears. We became homeless and were living in a tent for 5 months. We then managed to get hold of an old caravan on a car park, so stayed in that for 3 months. But we had no shower, toilet or running water and we had no benefits so couldn’t afford gas for heating or cooking. We had no help from any services and because of our rent arrears we thought the council couldn’t help us either.” We’d given up and my mental health was out of control – I just began to think of killing myself, cos I couldn’t see any way out of our situation.”

What support did Shiloh give you?

“We had been to Shiloh before, but we were rightly asked to leave, cos our behaviour was out of order. But we came back and asked for help and they were really great with us – they said they could help us and they were true to their word. We got warm clothing and food which was great, but it was the serious stuff that made a difference – they helped us with our benefits and housing. They helped us to speak with the council and we got a (RMBC) Homeless Officer called Maria who searched different places to find us a house.  We had no way of being contacted though, so Shiloh was our go to place where we could get stuff sorted. Within 4 weeks Shiloh supported us to get all our benefits and to move into a temporary new home (with NACRO).”

How do you feel now?

“A thousand times better! I’ve put weight on, my mental health has improved massively and we are both now stable and on a methadone prescription (via CGL). We never thought it could have happened like this – we had given up.”

What’s next for you?

“After Christmas, we’re gonna join a course at Shiloh called ‘Renting Ready’ (run by CRISIS). We want to get a permanent place and this course can give us that.”

What would you say to anyone in Rotherham in a similar situation to you?

“Definitely go to Shiloh. The other services we tried didn’t make it happen, but Shiloh did.”

Shiloh is more than just a place to come for food and basic needs. Our staff and volunteers are on hand to support people towards independent living. We have a number of different support agencies based at our building, which makes it easier to quickly resolve issues. Please consider supporting our Homeless at Christmas appeal so that we can continue to offer services to help people like Matt.