A voluntary group from Rotherham which works in the community supporting homeless and vulnerable people towards a fulfilling and independent life has been honoured with the Queen’s Award for Voluntary Service, the MBE for voluntary groups in the UK.

Shiloh Rotherham is a charity founded on Christian beliefs that offers support to adults in the borough who are homeless, at risk of homelessness or living in poverty. Shiloh’s team and partner organisations offer food, clothing, laundry, showers, training, mentoring and activities. Our aim is to support all guests to live a fulfilling and independent life.

Shiloh Rotherham is one of 250 volunteer-led groups to receive the prestigious award this year. The number of awarded groups has increased again this year, demonstrating the continuous expansion and value of the voluntary sector in today’s society.

Shiloh is only the second Rotherham charity in the last ten years to have received this award and was nominated for the award by former Mayor of Rotherham Cllr Eve Rose Keenan.

This is the highest award given to volunteer groups across the UK to recognise exceptional service within their communities. The recipients of the award are announced each year on 2 June – the anniversary of the Queen’s Coronation.

Shiloh’s Voluntary Chairman, John McDonnell said he is delighted that Shiloh, with its team of volunteers has received this prestigious award. He said: “This could only have been possible with the support of the Rotherham community which has supported the work of Shiloh for over 25 years.

“The Shiloh team have worked tirelessly over recent years developing its provision to not only to provide hearty meals and clothing to the homeless and vulnerable in Rotherham but also providing them with services, mentoring and training so they can attain fulfilling and independent lives.”

John and Jane McDonnell, Judy Dalton and Linda Barnes from Shiloh Rotherham attended a garden party at Buckingham Palace on 15 May where they saw the Queen and other awardees of this year’s 2018 award. 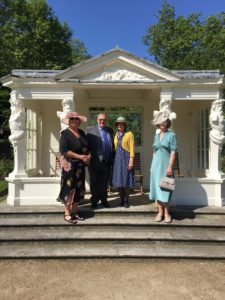 Judy Dalton Vice-Chair of Shiloh, said, “Our visit to Buckingham Palace was a fantastic day and we were proud to represent Shiloh’s volunteers. The weather and the gardens were amazing, there were hats, civic chains and Bishops galore! We were lucky to catch sight of Her Majesty the Queen greeting some of the guests. All in all a wonderful day to pay tribute to Shiloh’s voluntary services.”

Cllr Dominic Beck, Cabinet Member for Housing at Rotherham Council added: “Congratulations to Shiloh on this fantastic achievement. It is truly well deserved. They do an amazing job working with the homeless and it is great to see them recognised nationally in this way. We are lucky to have them in the borough.”

Nationally the awardees are incredibly diverse, innovative and impactful, ranging from FISH Neighbourhood Care, an organisation committed to combating loneliness and social isolation in older and vulnerable people living in Barnes, Mortlake and East Sheen in Greater London to The Monday Night Club, providing social opportunities and sporting activities for adults with learning disabilities and autism in Worcestershire.

Shiloh Rotherham will receive the award from HM Lord-Lieutenant of South Yorkshire later this summer.

Andrew Coombe, HM Lord-Lieutenant of South Yorkshire, said “It is wonderful that several organisations in South Yorkshire have been recognised and honoured in this way. The recipients are a small number of those wonderful organisations that quietly contribute so much to the wellbeing and infrastructure of their County. I hope more will be recognised for their invaluable contribution in the years ahead.”

Tracey Crouch, Minister for Sport and Civil Society, said: “Everyone who has received this award should be incredibly proud. Their service, commitment and care have a profoundly positive impact on communities throughout the country and I am delighted they have been recognised with this prestigious award.

“The record number of recipients this year is testament to the strength of the voluntary sector and I am sure this trend will continue into the future. If you know any organisations that deserve to be recognised, make your voice heard and nominate them for next year.”

The Queen’s Award for Voluntary Service Independent Committee Chair, former broadcaster and journalist, Sir Martyn Lewis CBE said: “This year’s record number of Queen’s Award awardees are a powerful testimony to the remarkable achievements and innovative ideas which characterise volunteering in the UK. They prove that, more than ever, volunteers beavering away at grassroots level are the active lifeblood of our communities, identifying all kinds of problems and issues and tackling them with enthusiasm, talent and a high degree of success.

“The recipients of the Queen’s Award are at the very top of a formidable volunteering movement in the UK involving millions of our citizens, and going from strength to strength.”